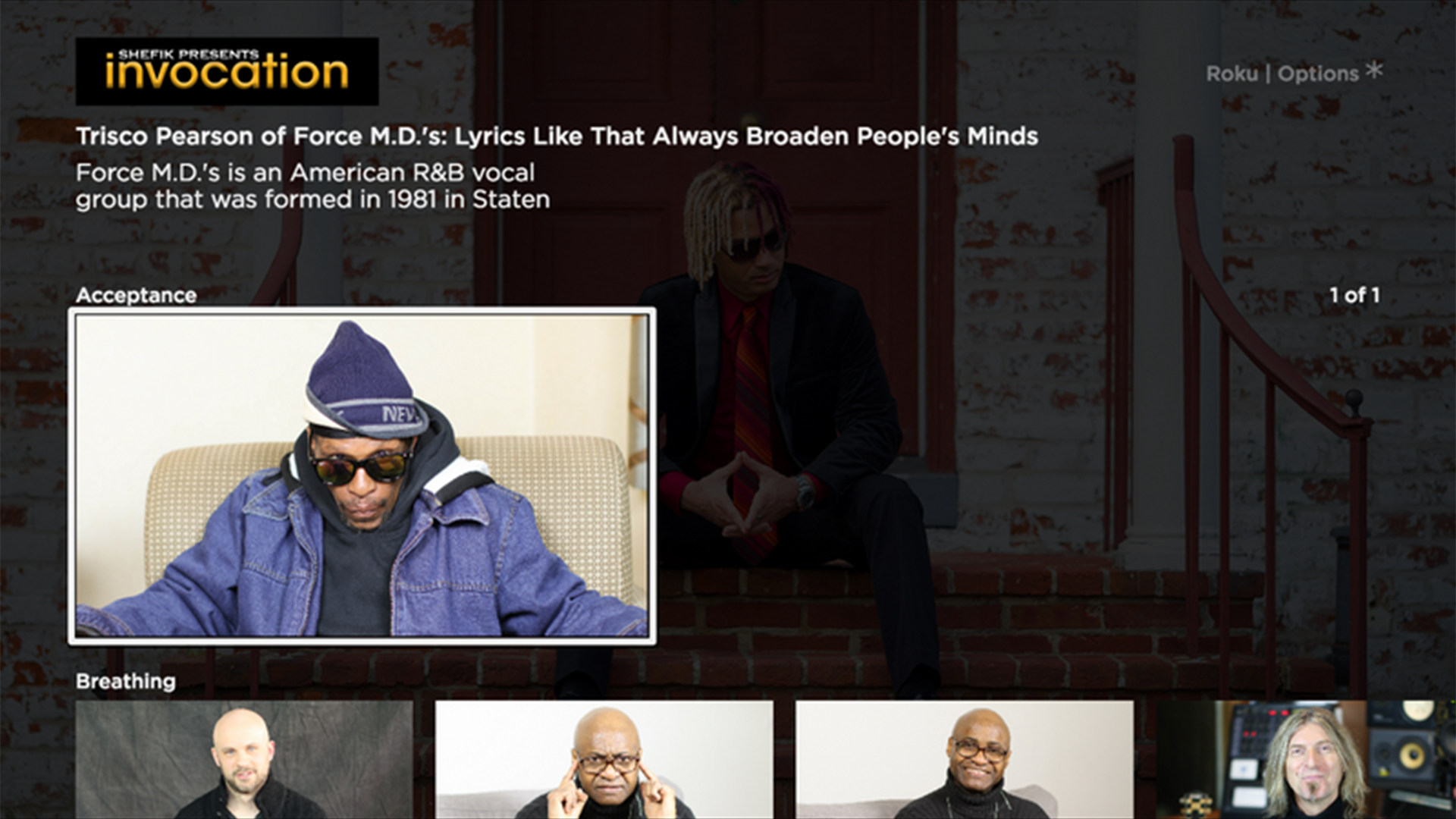 NEW YORK — Roku (https://www.roku.com) provides the simplest way to stream entertainment to your television. On your terms. Get to know the must-have app for streamers. Active accounts at the end of 2018 topped 27 million, up roughly 40% year-over-year. And, Roku's customers streamed their hearts out, as total streaming hours in 2018 were about 24 billion hours of movies, television episodes, sports, and more. The company operates the No. 1 television streaming platform in the United States, as measured by hours streamed (Kantar 2020).

At Roku (https://channelstore.roku.com/details/1498b3f50b41caf799a1c5eaaf45dc1c/shefik-presents-invocation), media personality Shefik launches content from his self-produced and self-directed video series, "Shefik presents Invocation" (https://invocation.co). He uses this media platform to amplify the voices and acknowledge the thought patterns of people across a variety of ages, ethnicities, occupations, creeds, and belief systems.

"I am excited about expanding my audience with Roku," says Shefik.

Roku streaming players are set-top boxes for the delivery of over-the-top content. Content is provided by Roku partners, identified using the "channel" vernacular, such as the channel "Shefik presents Invocation". Each separate channel supports content from one partner, although some content partners have more than one channel. Roku streaming devices are used by millions of consumers in North America, Latin America, and in parts of Europe, including the United Kingdom, Ireland, and France.

"'Shefik presents Invocation' is both an entertaining and informative platform for artists of every genre," says recording artist and multi-platinum songwriter Janice Dempsey. "I'm honored to be included!"

"Shefik presents Invocation" is a mesmerizing and thought-provoking journey through musical discovery and appreciation that spans the decades. Content includes video footage, and its audio is severed and packaged as a conceptual radio show — currently broadcast on 23 terrestrial radio stations and frequencies throughout the United States — as well as a podcast, under the title "Shefik presents Invocation: The Journey Continues". Each episode, produced by Shefik, highlights one relatable focal point, encompassing a unique thematic concept that invigorates the audience with creative impact. The content is oftentimes aligned with Shefik's various philanthropic endeavors and alliances with non-profit organizations.

Top recording artists, actors, business executives, politicians, community leaders, and other special guests are invited to offer their own commentary on a given topic, as a supplement to Shefik's engaging mindset. The content's main online hub at https://invocation.co serves as a conduit for discussion of the content, while featuring related videos and auxiliary content. As of this writing, "Shefik presents Invocation" has won over 40 industry awards (for audio, video, and website), many of which were awarded at the highest level.

Celebrating over 20 years in the entertainment and technology industries, Shefik (https://shefik.info) is an accomplished industry insider, who has appeared on MTV, SiriusXM, PBS, BET, network television, and in print media, as well as internationally on TRT World (Turkey). He has held senior-level positions at many Fortune 500 companies and celebrated brands, including IBM, NBCUniversal, MTV World, Merck, Merriam-Webster, and Wolters Kluwer. A seasoned pro in social media with a career background as a Lead Architect and Senior Web Developer, Shefik is on the cutting edge of new media. As a videographer and producer, his work has been featured in television broadcasts and video productions for TIME magazine, The Washington Center, "Unsung" (TV One), and Broadway World. Additionally, his photography has been featured in print and online publications, such as The Independent (United Kingdom), Daily Mail (United Kingdom), Harvard Kennedy School Magazine, Playbill, and China Press, as well as around 100 television and radio outlets owned by Cox Media Group. He is currently the Executive Producer and Host of the nationally syndicated radio show "Shefik presents Invocation" (https://invocation.co), which is broadcast on 23 terrestrial radio stations and frequencies throughout the United States, as well as the internationally syndicated video series of the same name, via Amazon and other notable outlets.

Eloisa Diaz-Sanz: One of My Favorite Quotes Is by Malcolm X

Sellah hails from a culturally diverse background. In 2017, he sang on a commercial for a major brand, which was broadcast during Super Bowl LI, as well as streamed online at YouTube, where it amassed over 17 million views.